Years ago, a colleague was relaxing in his backyard when he heard a noise. Upon investigation, he discovered a stranger heading through an open window and toward his couch. It wasn’t a traditional home invasion, though. The squatter had taken one look at the property and assumed it was unoccupied: Why else, he reasoned, would the yard be so “overgrown” with wild plants?

This was not the scenario I’d envisioned when my workmate first asked for wildlife gardening advice. While offering ideas and plants from my habitat, I’d assured him he’d see butterflies and other animals taking up residence. It never occurred to me that his efforts would also encourage fellow humans to climb through his windows. 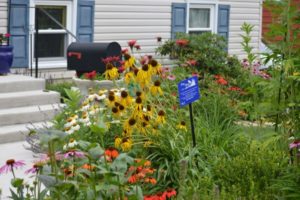 The problem was that the new gardener had implemented only half my suggestions, putting his plants directly into the old lawn that sloped to a busy sidewalk. He didn’t feel like bothering with part 2, which would have involved digging out the turf around his plantings or smothering it with newspaper and mulch. Instead, he let that old lawn grow high. The result was not the layered native plant garden I had imagined but a smattering of wildflowers engulfed in out-of-place fescues and invasives gone to seed. (Adding to the abandoned-home effect was an ascetic and nearly opposite approach indoors, where all walls, tables and shelves were bare.)

Though the front-yard planting was partly intentional, it didn’t look that way to other people. Without “cues to care”—a phrase coined by landscape architect Joan Iverson Nassauer to describe visual hints of human stewardship—the property resembled an abandoned lot or roadside ditch. While I find such free-range, self-willed patches beautiful because of their high value to wildlife, most suburbanites accustomed to mowed-down yards and sterile office parks see them as aberrant.

(Read the complete article on how to create a beautiful native planting in your yard here.)