Green Towson Alliance has sent this letter to members of the Baltimore County Council.

Green Towson Alliance (GTA) opposes the October 6, 2021 map proposed by the Baltimore  County redistricting commission for two reasons: 1) the map fails to unite greater Towson into a  single district and 2) the map as drawn does not conform to the Voting Rights Act due to  unlawful minority vote dilution.

Most alarming in the proposed map is the boundary change that splits downtown Towson (the  area defined by the Downtown Towson District [DTD] Overlay) between two councilmanic  districts (see Exhibit A). The DTD Overlay is a performance-based zoning overlay with  environmental sustainability requirements that recognize the unique challenges of the urban  setting such as the heat island effect, lack of open space, poor air quality and the need for  complete streets (that reduce traffic congestion by encouraging safe walking and bicycling while  also reducing and filtering stormwater). Downtown Towson and its dense surrounding  neighborhoods have land use, land development and livability concerns that are very different  from the concerns of the more suburban and rural areas of District 3. Splitting the DTD between  two districts could cause legislative gridlock on many important issues. The Redistricting  Commission must acknowledge the DTD and its nearby neighborhoods as a community and  implement its directive to “provide districts that are compact, contiguous, and in which due  regard is given to natural, geographic and community boundaries.”

In keeping with our principles of environmental justice, GTA endorses the call for two majority minority districts and a third district that is nearly evenly divided between minority and white  populations. Maps such as those proposed by the NAACP/ACLU or Fergal Mullally, member of Indivisible Towson, show there are multiple ways to provide more racial equity in redistricting. As the NAACP/ACLU states in their September 28, 2021 letter to the Redistricting Commission,  their proposed redistricting map demonstrates that “it is possible to craft a racially fair plan  achieving Voting Rights Act compliance, while still adhering to traditional redistricting  principles, and satisfying all other legal and political requirements.” Giving citizens an  opportunity to expand the diversity of the County Council will help address the outsized burden  that minorities and low-income communities carry due to historic injustices and the  disproportionate harmful effects of climate change.

We believe the Baltimore County Council can ill afford to invite completely avoidable litigation  at a time when we must act on climate change and reckon with the county’s legacy of racism.  Please send the proposed map back to the Redistricting Commission to put the DTD and its  surrounding neighborhoods in a single district and comply with the Voting Rights Act by  enhancing racial equity throughout Baltimore County.

The Executive Committee of the Green Towson Alliance greentowsonalliance@gmail.com 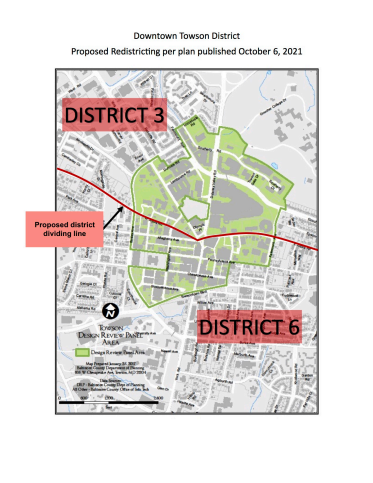