In a pandemic, do local streams stop flooding, does trash stop pouring down storm drains, winding up in our local waterways, or do pollutants stop seeping out of pipes to drain downhill?  Do our communities still need trees to soak up that storm water, shade our homes, and filter pollution from the air?  GTA volunteers have not given up the good work they’ve been doing for 6 years in our community.

GTA members continued activities that can be done safely all year! We didn’t stop planting trees, cleaning streams, or advocating for good environmental policies in Towson and Baltimore County.

We had to plan carefully for socially-distanced ways to work with our volunteers to clean streams or plant canopy trees in our neighborhoods. We found plenty of things we could do either alone or in small groups.

Here’s what Green Towson Alliance did in 2020:

In early 2020, GTA members completed the project of pruning trees in the medianstrip of Loch Raven Boulevard, helping the trees grow tall, healthy, and beautiful on this entrance to the Towson area from Baltimore city.  We also helped Boy Scouts prune the street trees in Anneslie.

In the spring, we offered “contactless” native plants by 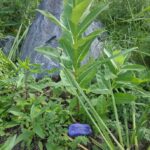 potting up many dozens of species of native plants from our gardens and leaving them on our front steps. People from 14 Towson area neighborhoods took the plants home! These native perennials provide food, nectar, and homes to many species of bees, butterflies, birds, and other creatures who live here among us. 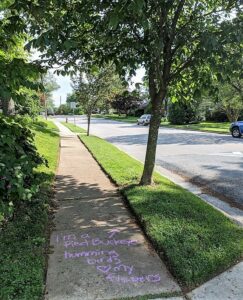 To continue our efforts to point out the importance of native plants to our ecosystems, GTA members launched a new initiative called “Chalk1Up” where members wrote the names of native trees on the nearby sidewalk using fat, colorful chalk.  People walking on the sidewalks could learn the names of those native trees in our communities. 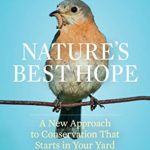 Hope. As an outgrowth of this discussion, GTA created a Homegrown National Park workgroup. To further our efforts to spread the word about the importance of native plants, GTA will be holding its first Towson Native Garden contest next spring.

To further the discussion about the importance of native plants, and the harm that introduced plants create in our environment, we photographed a series of Butterfly bushes (introduced from Asia) that have taken over an area at I-83 and Timonium Rd. , and posted these photos on social media. Non-native plants that spread in our neighborhoods crowd out the native plants that provide vital food and shelter to our community’s insects and birds.

In July, we became aware through posts on NextDoor that hundreds of bits of Styrofoam were floating through the air in many Towson neighborhoods. These bits were ending up on sidewalks, yards, and gardens surrounding downtown Towson. We conducted an investigation and learned that these styrofoam “fines” are created during the installation process of Exterior Finishing Insulation Systems (EFIS), and that proper containment methods were not being used by the contractor. We found these fines on the streambank of the Towson Run stream, which flows to the Chesapeake Bay. We have formed a workgroup on this issue and hope to work with the county to ensure this pollution does not happen again.

Throughout 2020, GTA members watched with delight as neighbors came to Radebaugh Park for outdoor play, whether alone or in couples or small groups, and as the native trees, shrubs and perennial flowers at the entrance bloomed and grew. Having this new park open during the pandemic was truly a wonderful gift throughout the spring, summer, and early fall. The park closed last month for construction of Phase 2 amenities including paths and benches. GTA looks forward to the completion of the hard structures in spring 2021 and the planting of 93 native canopy trees!

In September and October, Green Towson Alliance organized clean-ups of 10 sections of our local streams. Volunteers came from all over the Towson Area, including two Girl Scout troops, to form 5-person teams. Everyone wore masks and practiced social distancing while cleaning out trash from the Herring Run, the Jones Falls, and their tributaries. These stream clean-ups were organized in liaison with the Alliance for the Chesapeake Bay.

with native plants at the County Office Building in October. We worked with Will Morales of Troop 102 to get permission to dig out the Nandina domestica from in front of the building on West Chesapeake Avenue and replace them with native Rhododendrons, Oakleaf Hydrangeas, and Ninebarks. Nandina domestica is a Tier 2 invasive plant in Maryland, meaning places that sell it must have a warning label for potential environmental harm. Nandina domestica has escaped cultivation in 9 states and was the Maryland Invasive Species Council’s “Invader of the Month” in February, 2018.

GTA worked with the Chamber of Commerce and other stakeholders to achieveMaryland Main Street status for Towson.  We will continue to pursue streetscape greening projects through that designation. In addition, Green Towson Alliance has been invited to participate on the County’s Open Space Fee workgroup.

In November and early December, more than 150 native canopy trees were planted in Towson neighborhoods from Anneslie north to Lutherville,  by volunteers for Green Towson Alliance in liaison with Blue Water Baltimore. Recruiting sites for the new trees started last spring, and has already resumed for 2021. Nearly 50 more trees were planted by Baltimore County’s Backyard Trees program, through GTA’s connections. An additional 40 or more trees will be planted by the County next spring in 2 small parks, as well as 93 trees in Radebaugh Park. All of these tree-plantings have come about through  the leadership of Green Towson Alliance members.

Our work monitoring development projects in Towson is ongoing. We are advocating for observing the full forest buffer requirements at  the Red Maple Place affordable housing project on East Joppa Rd. We are advocating for green and walkable streetscapes at the 706 Washington Avenue Dormitory project in downtown Towson.

Throughout the year, the Green Towson Alliance Executive

Committee continued its work, meeting while masked and socially distanced at Overlook Park, or virtually via Zoom. GTA members continued to join our regular, bi-monthly Zoom meetings  and to participate in our good works.

Green Towson Alliance volunteers will continue to work virtually in 2021, until we see an end to the pandemic and can join together in person again to keep Towson green and improve and preserve our local environment.